Cancellations must be made 24 hours in advance or the full lesson fee will be charged.

Heath De Fount-Haberlin is one of the most in-demand guitar teachers in the Bay Area. Heath is a San Francisco-based guitarist, singer-songwriter and musician. He is also a producer, arranger and author who teaches guitar, bass, piano and songwriting. He currently teaches in San Francisco, Marin, Los Angeles and Sun Valley, Idaho. For over 20 years, Heath has been unlocking the secrets of the guitar for students of all levels and varied interests. As a teacher, he has over 100 guitar students in the Bay Area ranging in age from eight to eighty-eight. His teaching roster includes celebrities, Grammy winners, Bay Area musicians and the average Joe alike.

Heath teaches several well known guitarists including Grammy winner Adam Levy, guitarist of Norah Jones and Tracy Chapman. Martin Luther, guitarist of the Roots and the star of the Oscar, Grammy and Golden globe nominated movie, "Across The Universe". Heath gives guitar lessons to bassist Chris Chaney (Alanis Morissette, Jane's Addiction, Robben Ford) who is also a Mill Valley native who has graced the cover of Bass Player Magazine. Chris was also recently nominated for the Marin Rock n' Roll Hall Of Fame. Heath also taught Sonoma child jazz prodigy and Grammy nominated guitarist Julian Lage. Julian Lage was also the subject of "Jules At Eight", Mark Becker's Academy-Award nominated documentary, filmed at Real Guitars, in which Heath is in (jamming with Julian) and has three featured original songs entitled, "It's Muddy In The Water", "It's A Minor Thang" and "6th Street". Check out the video below! Julian was recently nominated for a 2010 Grammy Award for Best Contemporary Jazz Album for "Sounding Point". 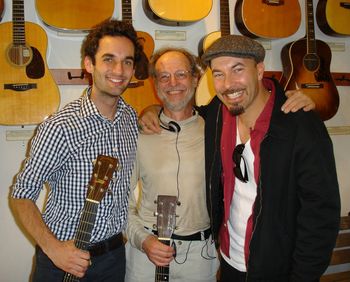 Julian Lage and Heath De Fount-Haberlin in "Jules At Eight"

Julian Lage plays "Ryland" at the Music Hall of Williamsburg